Welcome guest writer, Laura Acuna! Laura will be speaking at our Weekend Getaway in March. Read her bio at the end of this post. Enjoy!

The 12 days of Christmas began on Christmas Day, December 25, and will end on January 5 – the eve of the traditional date of the Epiphany. Epiphany commemorates the night that the Magi visited the baby Jesus.

Our culture says that Christmas began around Halloween and ended a week ago – but don’t you believe it! Christmas tradition has it right!

The Christmas story itself doesn’t end on the day of Jesus’ birth, either. The book of Luke records that on the 8th day after His arrival, Jesus was named and circumcised. Then, His parents took Him to the temple. When they arrived, they met two remarkable people. We don’t hear their names sung in many Christmas carols, but their stories are very important just the same.

Simeon and Anna were devout, elderly Jews who had been waiting a very, very long time to see their Messiah.

As devout believers, this meant that they had prayed and fasted over decades for Israel’s salvation to come.

Here is how Scripture describes Simeon:

Now there was a man in Jerusalem called Simeon, who was righteous and devout. He was waiting for the consolation of Israel, and the Holy Spirit was upon him. — Luke 2:25

There was also a prophetess, Anna, She was very old; she had lived with her husband seven years after her marriage, and then was a widow until she was eighty-four. She never left the temple but worshiped night and day, fasting and praying. — Luke 2:36-38

These were two faithful people who were prayed-up and in the right position to see the answer to their prayers.

And that is exactly what happened.

As soon as Simeon and Anna laid their eyes on the infant, they recognized Him!

No one knew the Messiah would come as a baby born to two teenagers from Nazareth, but that didn’t matter. Both Simeon and Anna had eyes to see the answer to their prayers – even when the answer came in a surprising way.

They knew Him when they saw Him.

Prayer and worship move us into the right position to see the blessing when it comes.

Anna was widowed at a young age – life certainly did not turn out the way she planned. She could have been bitter and remained focused on her loss, but Scripture says she spent her life praising God.

How many times have I missed seeing the blessings or the answered prayer when it arrives because I am dwelling what I don’t have?

Years ago, I lived through a season of what I considered ‘unanswered prayer.’ I was so discouraged. It wasn’t until a wise, older woman brought to my attention that I needed to lift my focus off of what God wasn’t doing so that I could see what He was doing.

I was so hyper-focused on what I wanted to see happen that I had completely missed many blessings that were occurring all around me. He was answering my prayers, but not in the way I expected.

Girls, we need to lift our eyes to see the big picture.

God is working in our lives and He is answering our prayers, even if the answer doesn’t come as we thought it would.

Like Simeon and Anna, we need to be in the right position to see the blessing when it comes. Devout and faithful were not just who they were. Devotion and faithfulness are the disciplines they practiced for a very long time.

Here’s the thing – there is no shortcut to a relationship with God that can be described as devout and faithful. It takes investment, commitment, and a true desire to be a follower, not just an ‘admirer’ of Jesus Christ.

With a bright and shiny clean slate to begin the year, I pray that you will consider where your eyes have been focused. Is it time to lift your gaze to view where your prayers are being answered? Don’t miss it – they may arrive in a most unexpected way.

Much love and many prayers for a blessed new year, 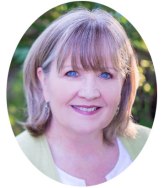 Laura Acuna exudes warmth, fun and authenticity weather speaking to her Bible study sisters, in front of a large group or in a one on one conversation. She passionately shares the truths the Lord has taught her through His word and through life lessons learned along the way. Married to her closest friend and encourager, she and Pat are the proud parents of three adult sons.

Laura is a graduate of Liberty University where she earned a degree in Christian Counseling and a Minor in Biblical Studies. She’s the cofounder of Sisters in Faith Ministries which includes The Manorwood Café Bible Study, Step Up Coaching for Women in Ministry and Sisters in Faith, a day conference which is in its 17th year. Laura served as a women’s ministry leader for 15 years, is a volunteer chaplain for her church and is a 2012 and 2013 “She Speaks” graduate.

Women are talking about The Connection!

“The ladies at The Connection are the sweetest. Super friendly, accepting, wise, compassionate ladies! You can always rely on them to be wearing a smile and giving you a hug when you see them. These wo men and The Connection are a gift from God to me.” — Heather

“I love the diversity of the group as well as how friendly and loving the women are.  I love the transparency & how real the women are.” — Ruthie
“The Connection is a lovely group of ladies that have blessed me in countless ways. Building deeper friendships with these women has been tremendously rewarding and was exactly what was missing in my life.” — Penny