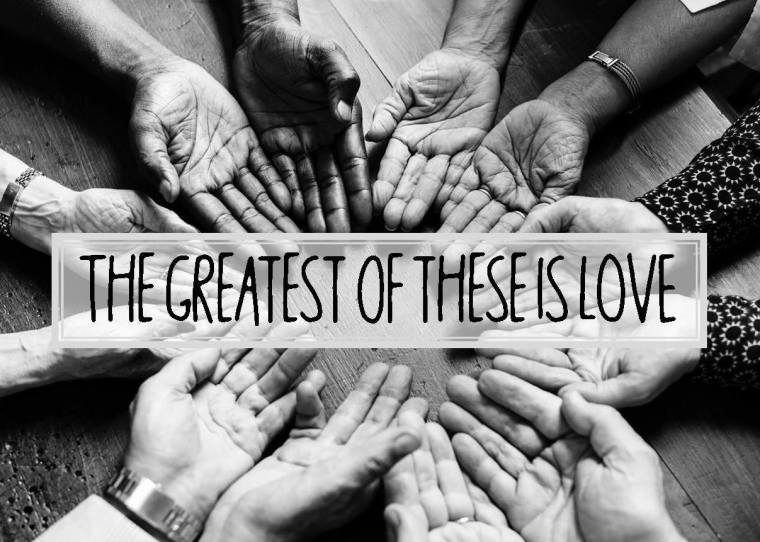 If I could speak all the languages of earth and of angels, but didn’t love others, I would only be a noisy gong or a clanging cymbal. If I had the gift of prophecy, and if I understood all of God’s secret plans and possessed all knowledge, and if I had such faith that I could move mountains, but didn’t love others, I would be nothing… Three things will last forever—faith, hope, and love—and the greatest of these is love. 1 Corinthians 13

A while ago, I decided that I was going to post only uplifting things. After all, there are enough people posting negativity. Today, I feel that there is something I need to share, because if I am silent, then I am part of the problem.

Yesterday, I read one of my dear friend’s posts. A stranger called her the “N” word.

I was heartbroken and angry for her. I cannot even begin to imagine how she felt, because I have never walked in her shoes. But I hurt because she is hurting. I spent most of the day thinking about her. I also thought a lot about my Jewish friends and family members and the recent killings in Pittsburgh.

After I put the kids to bed, I flipped through Netflix and Amazon, but my heart was too heavy to watch anything cheerful. So, I watched a documentary about Auschwitz, where some of my husband’s family members were murdered. I wondered, “What can I do? How can I change the world?”

A little while after I started watching TV, my eight-year-old, Joey woke up and came to tell me his throat hurt. (We already have one case of strep throat in the family this week.) He asked me if he could lie near me and watch TV with me. I thought about turning off the documentary, and putting on a cartoon, but I didn’t. Instead, I started talking to Joey about the Holocaust. We talked about how Jamie’s grandfather escaped as a young teenager, but his grandfather’s parents, aunts and uncles died in concentration camps. Some died at Auschwitz.

Jamie and I are very intentional about teaching our kids. We have talked, watched documentaries and movies, and read books with them about hate. Two years ago, I read a book to them about Ruby Bridges. I was embarrassed to admit that I didn’t know about her (or Emitt Till) until I was an adult. Last year we watched a movie about the life and career of a baseball hero, Jackie Robinson called, “42.” We will definitely take them to the Holocaust museum and someday, we will take them to Auschwitz.

Why am I sharing this?

Because I hope to inspire you to do the same. If we can teach our kids when they are young not to hate anyone, maybe we can change the world one family at a time.

I am not a perfect person. I struggle with my own prejudices. I think we ALL have some prejudices, if we are brave enough to admit it. When I find myself thinking something about someone that I shouldn’t, I call myself out on it. Sometimes I lack the courage to speak about these things. I share all of this because I don’t want anyone to think that I think too highly of myself.

When I start to think that I am powerless, I think about Mister Rogers. He is one of my heroes, besides my mother and Jesus, of course.

Who would have thought that a children’s show could change the world? He modeled for all of us that we should educate young children about their feelings and teach them to respect the feelings of others.

We are NOT powerless, but we must be intentional.

Most importantly, we must lead by example.

Change starts with me.

Hopefully, with God’s help, I can be a small pebble hitting the surface causing many ripples that can bring healing to our broken world.

“And let us consider how we may spur one another on toward love and good deeds.” Hebrews 10:24

Emily Sharp grew up in Baltimore, MD.  She accepted Jesus as her Savior at the age of 6 and immediately wanted to be a missionary.  She moved to Waynesboro in 2006 and now resides in Fairfield.  After years of infertility, Emily and her husband, Jamie were blessed with three boys.  When Emily had her third child, all three children were under age 2, so Emily has been in the mission field of motherhood.  Emily knows that she will realize her dream of being a missionary someday, but her family is her primary ministry.  She utilizes social media to share her testimony with others.  It is her hope to point others towards God by sharing her own journey.  Sometimes the journey is filled with joy.  Other times, there is sorrow.  But she shares some of her most intimate thoughts so that others will know that we are not alone.  There is a God, and God is LOVE.

Women are talking about The Connection!

“The ladies at The Connection are the sweetest. Super friendly, accepting, wise, compassionate ladies! You can always rely on them to be wearing a smile and giving you a hug when you see them. These wo men and The Connection are a gift from God to me.” — Heather

“I love the diversity of the group as well as how friendly and loving the women are.  I love the transparency & how real the women are.” — Ruthie
“The Connection is a lovely group of ladies that have blessed me in countless ways. Building deeper friendships with these women has been tremendously rewarding and was exactly what was missing in my life.” — Penny